We awake to take on Northern Iceland! You may think sleeping in the back of a camper van, after three full days exploring till late in the night (morning) each day, we may be rundown.  However, each day of this journey on Ring Road opens new surprises and adventures!

We were quite excited because we were heading to a place where it is a 99% success rate to see whales. This little Icelandic town is called Husvaik. Whales are certainly something we definitely don’t get to see in our warm Florida waters. We went with the tour group North Sailing, they were known for their carbon free whale watching and had a good sighting rate. 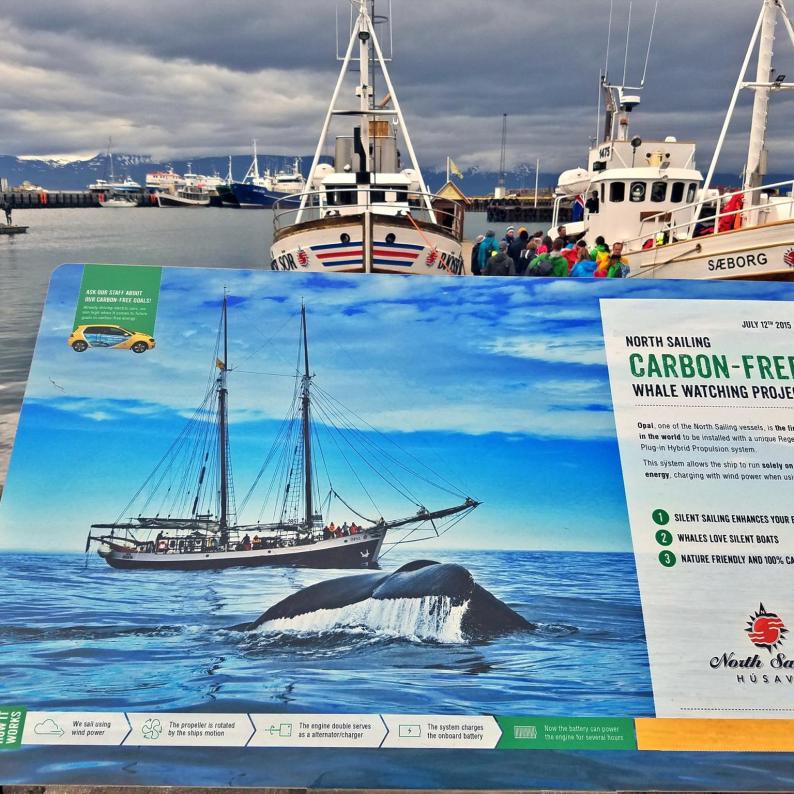 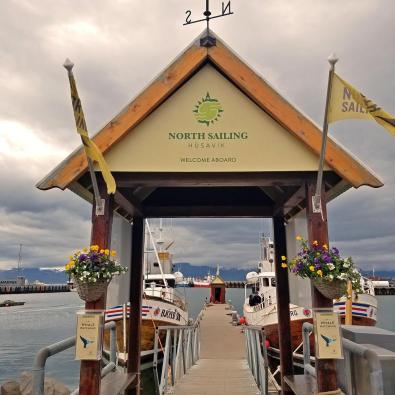 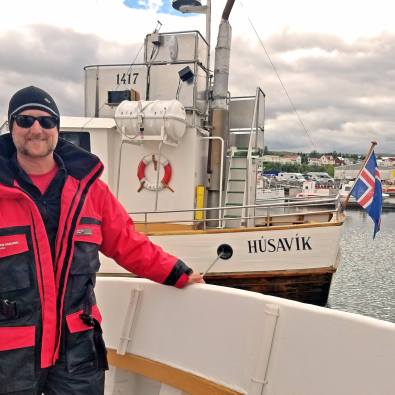 It is quite cold in Northern Iceland, even in the middle of summer. We were given body suits to combat the wind on the water, and scored seats in the crow’s nest on the boat. We headed out to sea with much anticipation. And sure enough about 45 minutes into our trip, a humpback whale was spotted! Apparently, from what our tour guide was saying this sighting was not a typical sighting. This one particular humpback kept jumping, he must have jumped 20 times!! He was having soooo much fun and so were we! 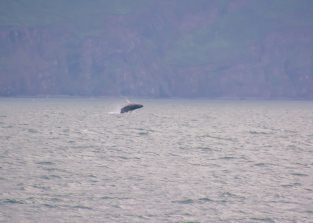 We also saw a bunch of puffins with fish dangling from their mouths. 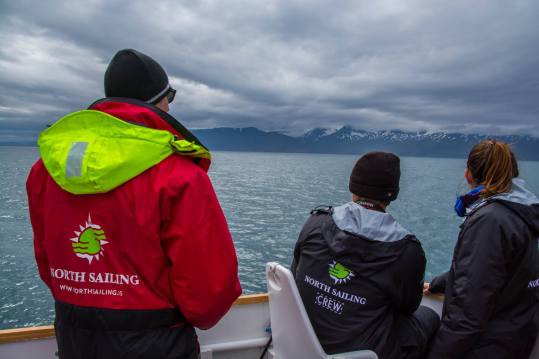 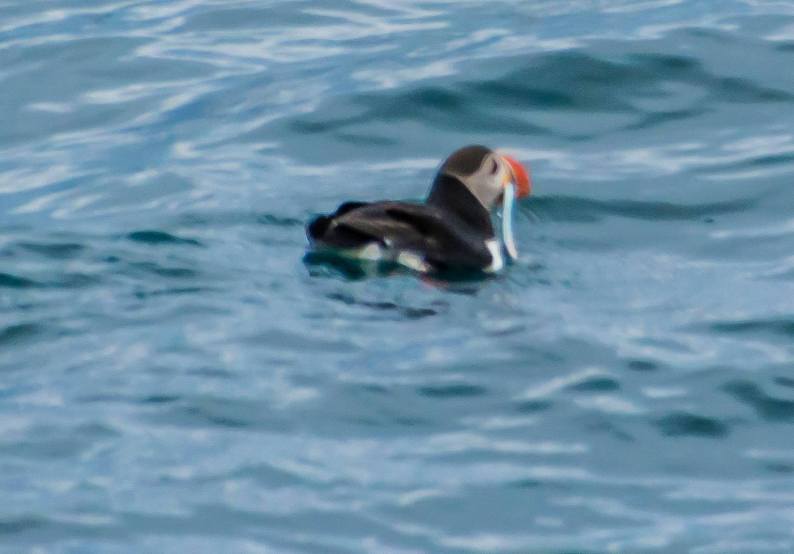 After spending the morning in Husavik, we had some lunch and jumped in our van to head to our next destination,Lake Mývatn area. Mývatn was formed after a massive eruption 2,300 years ago, and it remains geothermally active today. We stopped by the hot pools. The scent of sulfur was almost unbearable, but wow, the colors of these pools were amazing. 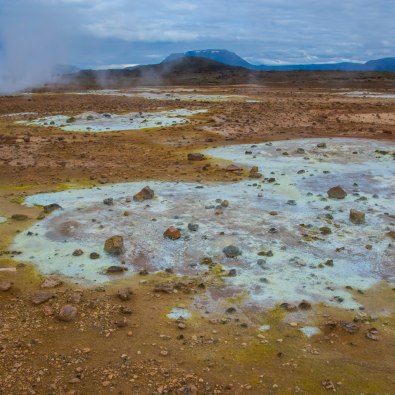 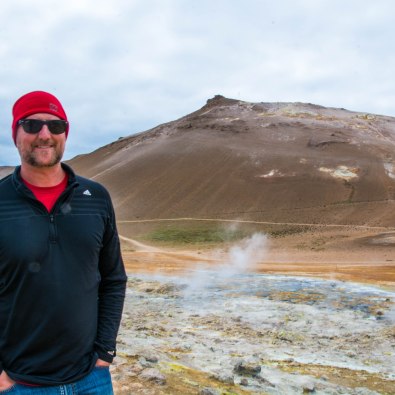 This certainly did not look like a place on Earth. 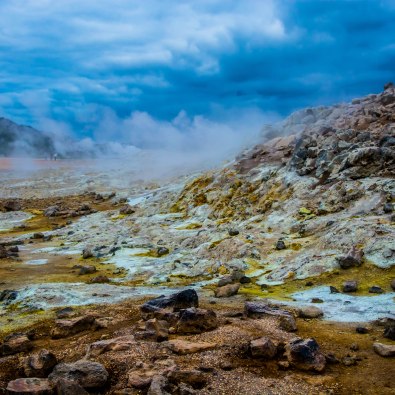 The water was literally boiling.

We took a walk down a mile or so to check out the lava field. Incredibly interesting terrain in Iceland, and Northern Iceland made us feel as if we were on another planet! 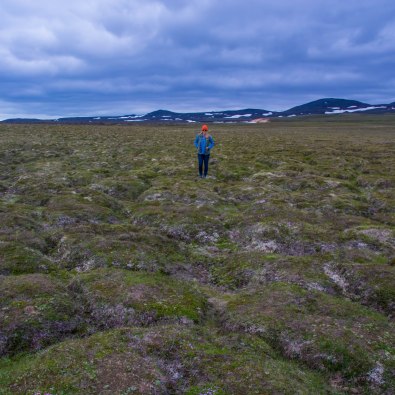 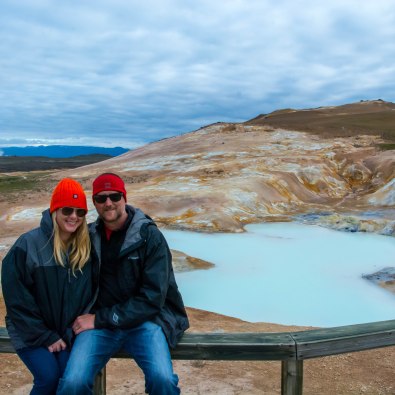 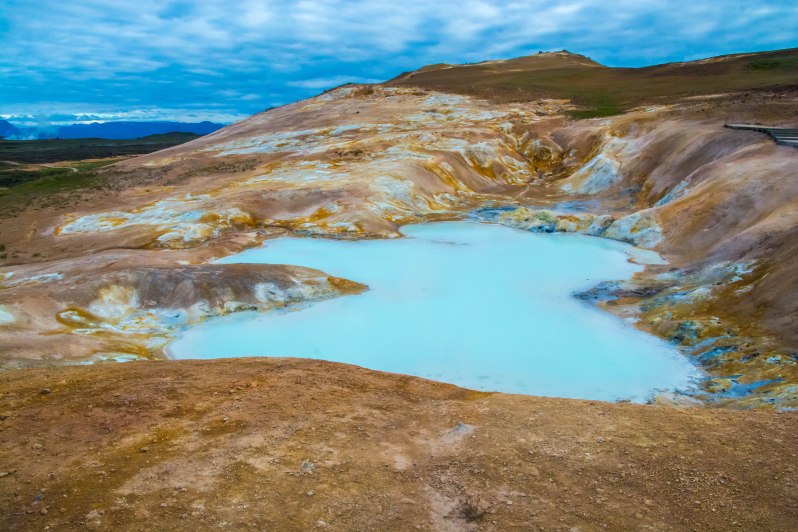 After the hot pools we head over to  Skutustadagigar (craters). This natural phenomena is formed when lava flows over wet ground and pushes the ground down. This causes a lot of steam to be trapped under the weight of the lava which then causes a lot of pressure. When the pressure becomes too much, it causes steam explosions and the formation of these beautiful pseudo craters. These pseudo craters are often called rootless craters as they have no end to them as do normal craters. We were told by a tour guide that these are the only craters on this planet that represent Mars craters. Super cool! 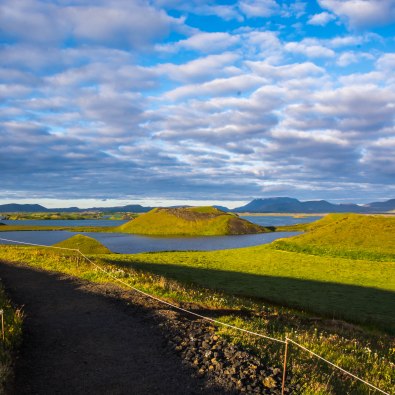 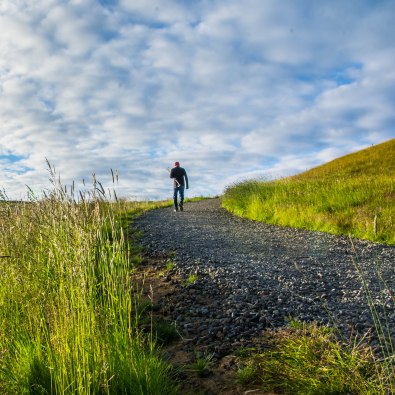 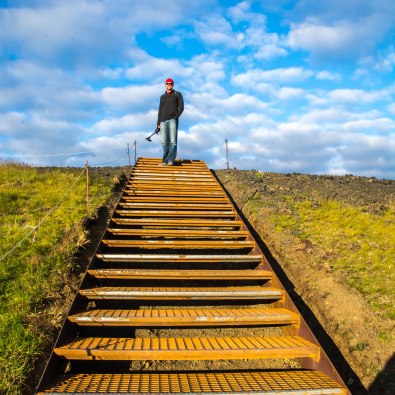 One thing this region has is the Myvatn Nature Bath. This is very similar to Blue Lagoon, but less touristy and a little bit smaller. It was a nice way to wind down our day in a nice hot natural spring. 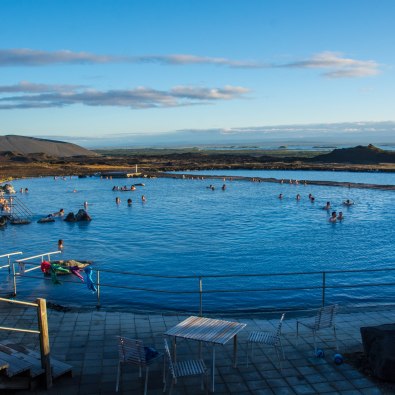 After our shower, we packed up and started heading to our next campsite around 11 p.m. This made for some great photos of Hverfjall (Hverfell) Crater. This 2500 year old, nearly symmetrical tephra crater rises 463 meters high and is 1040 meters across 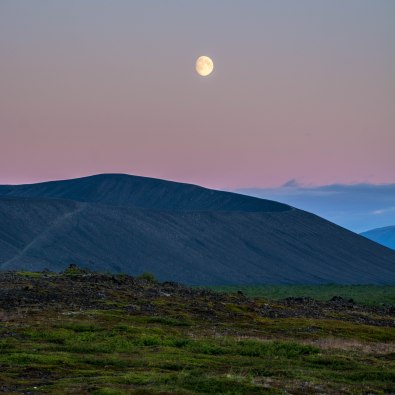 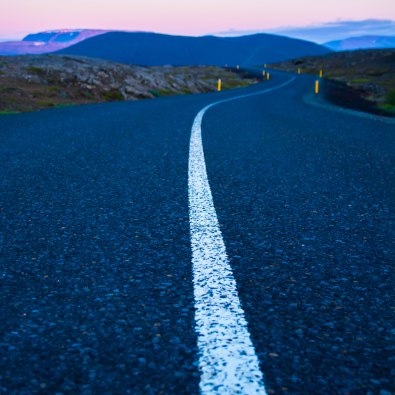 Picture of it during the day…. 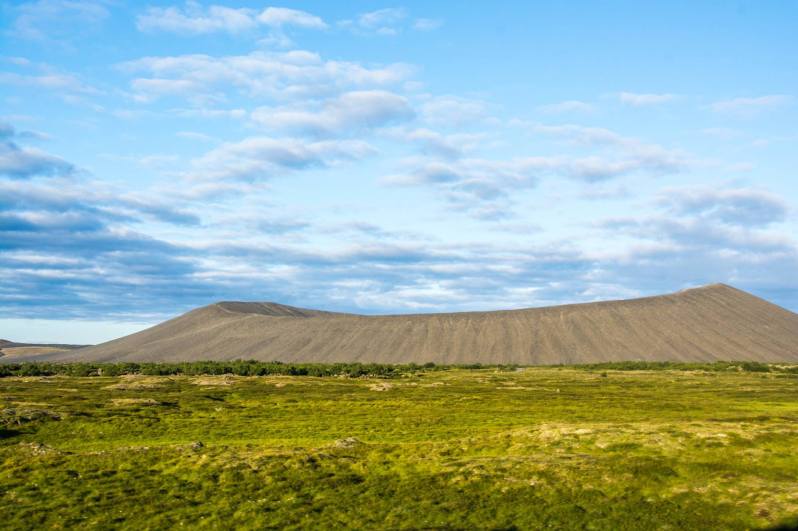 The midnight sun truly provides a great backdrop. These were taking driving to our campsite around midnight.  Northern Iceland is a goldmine at midnight!  Plenty of light, and an amazing experience to explore the remote, stunning scenery with just us two, and a few animals to keep us company! 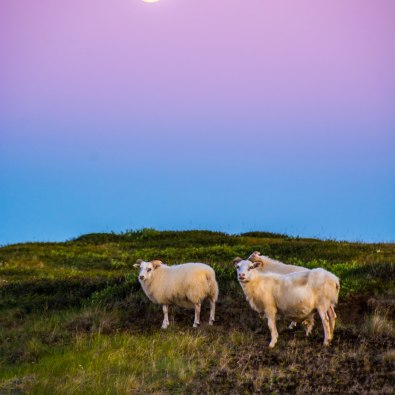 And of course, we stumbled upon another waterfall on our way to camp. This was taken around 1:00 am. Dettifoss is a waterfall in Vatnajokull National Park in Northeast  Iceland, and is reputed to be the most powerful waterfall in Europe.  The water comes from the nearby Vatnajökull glacier, whose sediment-rich runoff colors the water a greyish white. You could certainly feel it’s power while standing there. 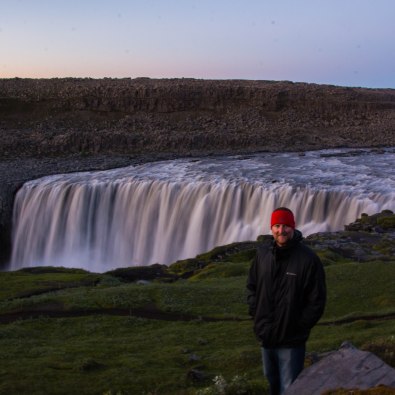 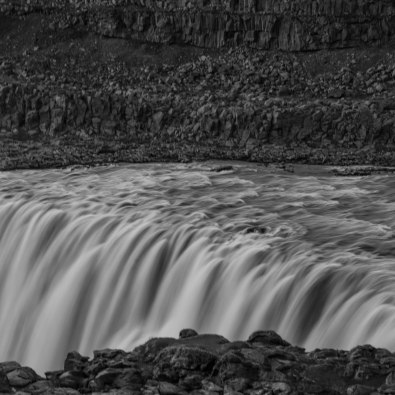 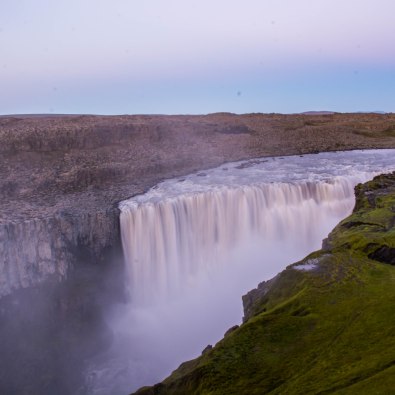 We arrived at our campsite around 2:30am at Fjallakaffi. The building looked like something from a movie (taken in the morning). 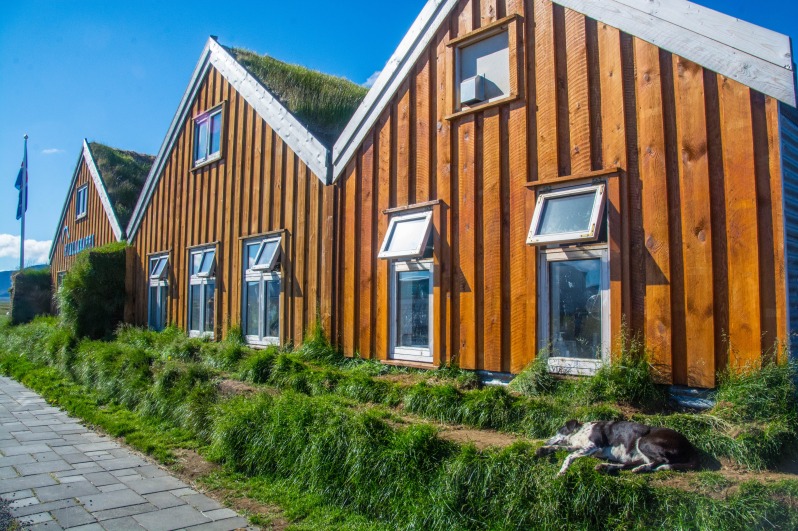