A lot has happened since our last post. It has been a very busy, but exciting week! We spent the day in Chiang Mai and stumbled upon a monk chat program near the temple. It’s a program where the monks chat with tourists about anything and everything. The goal for the monks is to practice their English. There were younger monks when we stopped by (in their 20s). We spoke with two, the first one we talked about the program, about his English and the classes he has to take. The second one we talked about Buddhism and their beliefs. Basically Buddhism is the belief in Karma. It was very interesting to get this insight from an actual monk.  Also, you can decide to become a monk at the age of 8. The benefits of doing this is that the monastery pays for your schooling and you can leave whenever you want. 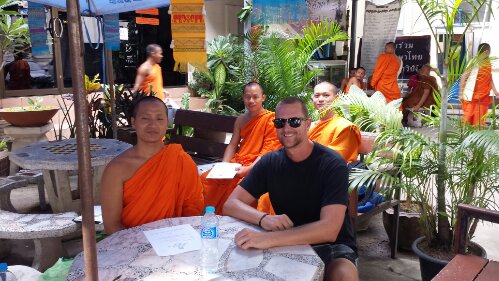 The next day we headed to Elephant Nature Park. This is something that we were really looking forward to! ENP is a unique project set in northern Chiang Mai. It was established in the 1990s from the founder Lek. ENP provides a sanctuary and rescue for elephants. In Thailand the elephants were once used for logging. In 1989 logging became illegal and left elephants in a vunerable state. They started using the elephants to make a quick buck and this is by any means. Most common are elephant treks and street begging. Elephant treks aren’t as bad, but the riding is bad for their backs and most of the time they are treated poorly (hook treatment). They will also take baby elephants to the streets and have people pose with them in exchange for money. There are 34 rescued elephants at the ENP. Four of them were blind due to severe abuse. They would stick hooks in their eyes if they didn’t listen.  One has two broken hips due to a logging accident. The others have been saved throughout the years. If Lek sees an elephant in distress she usually will purchase them to get them to ENP. We stayed one night, but wish we could stay forever!!

We started off walking the beautiful park and getting to know each elephant and their story. We would feed elephants along the way and give them a drink. We ended the first day washing Lucky, a circus elephant that was saved. She has gone blind due to the spotlight in her eyes for the last 30 years. The best part about Lucky, it looks like she is smiling!! She is so sweet and kept laying down when we were washing her! 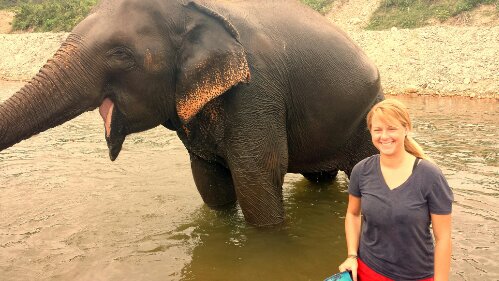 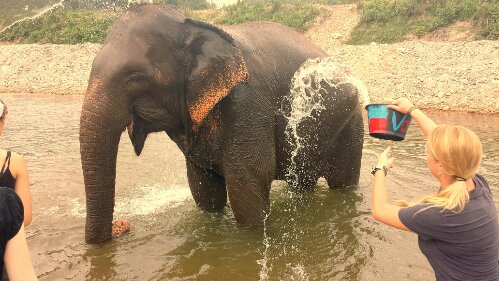 After their bath they like to go in the mud (go figure). We witnessed a mud bath with little Dok Mai’s herd (Dok Mai is the youngest of the elephants at 3 months old). They have scratching posts throughout the park. Elephants LOVE to scratch themseleves! 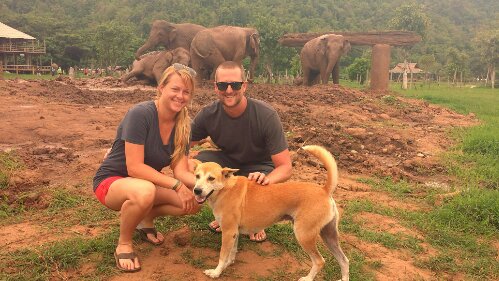 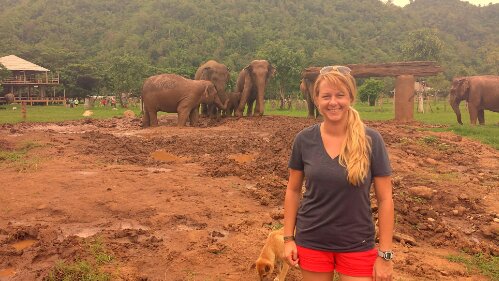 After the day has ended everyone goes back to their quarters and washes up for dinner. There is roughly 30 people that stay here in the park on any given day. Most of them our volunteers who come out to help Lek and her team. The volunteer time ranges from 2 weeks to a couple months. We had 6 people in our group and we just hung out on the patio and drank beers with our guide Apple.

The best part about this patio, that we so often sat on, is that the elephants just come straight up to you! Also you have a view of the park and the elephants just roaming free! A bonus is they have rescued all types of dogs from the Bangkok flood. They just roam about and hangout! 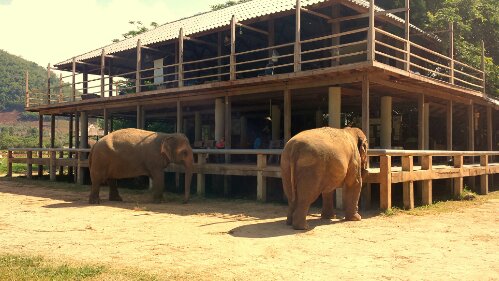 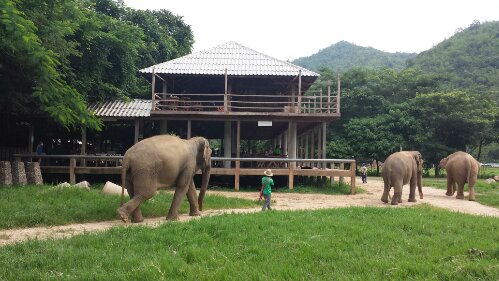 The second day was the best day! We started off roaming the fields again visting all the elephants. 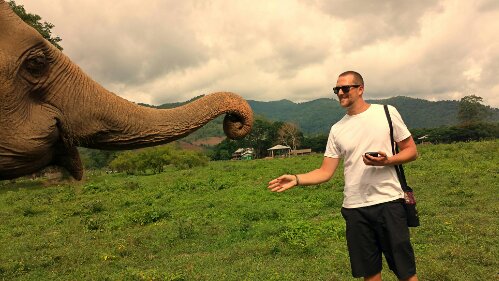 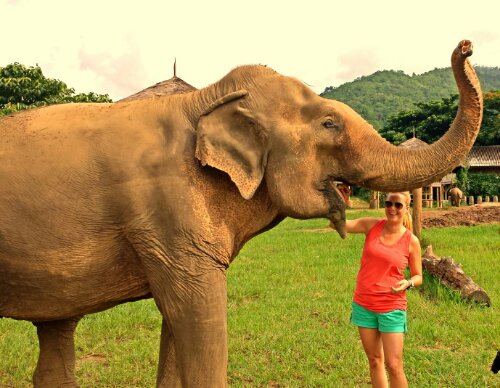 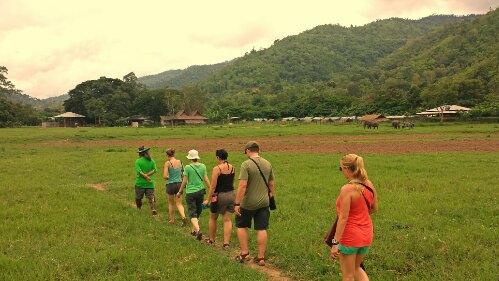 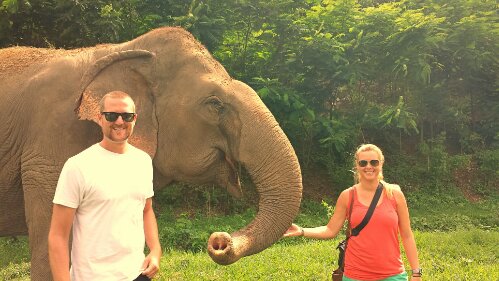 And then we stumbled upon 8 month Navann. HEAVEN!! 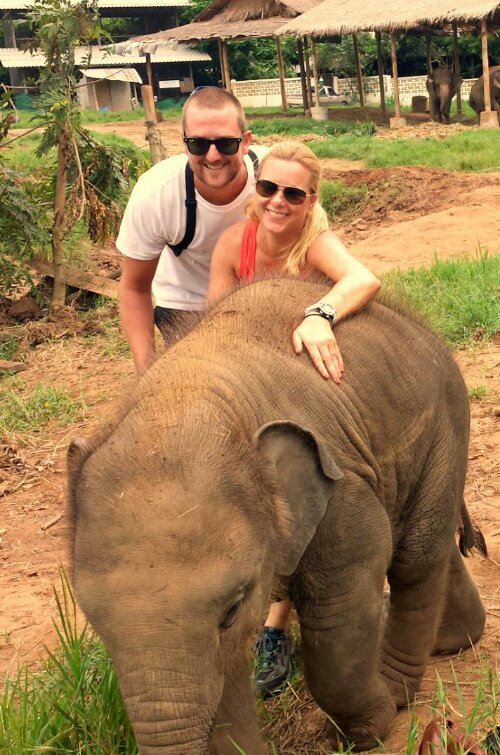 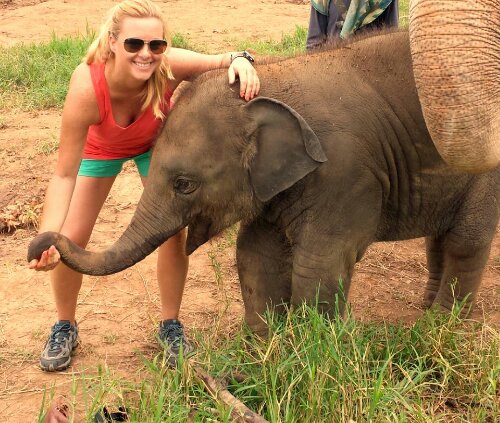 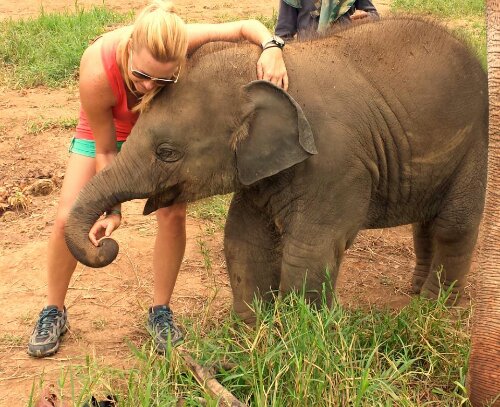 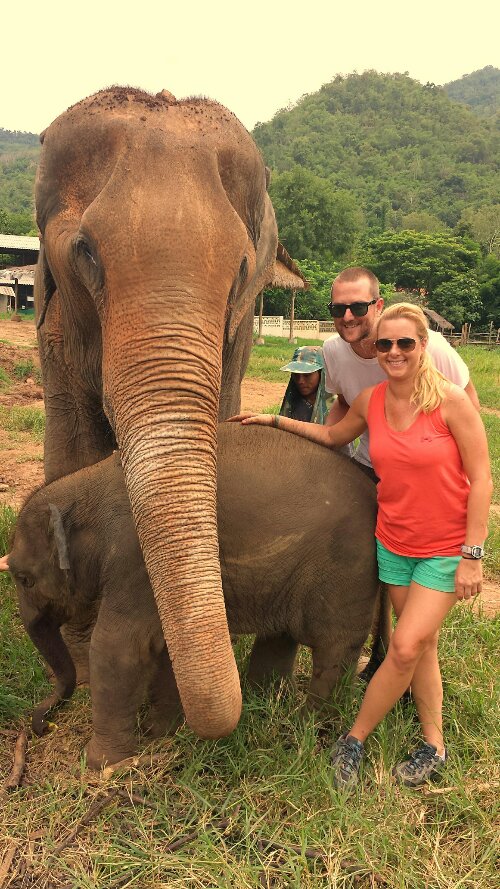 He was such a sweet little baby and wanted lots of bananas!

We thought our day was over until the founder, Lek grabbed our group and headed out to the fields. We have heard such great stories about Lek and she is rarely at the park because she is constantly out and about around the world spreading the knowledge about abused elephants and trying to bring awareness to the program. So this was a very nice surprise that we got one on one time. The elephants are obsessed with her and as soon as this one herd saw her….the 4 year old literally came running down the field to see her (she is really attached to Lek). After her, came Dok Mai’s herd! Before we know it, we are surrounded by elephants and little 3 month old Dok Mai. This was a REAL treat because it is rare to get this close to such a young elephant. Lek was playing with them and little Dok Mai was just romping about.

As we were taking pictures, Dok Mai kept ramming into people. She would just run full force and push you over! 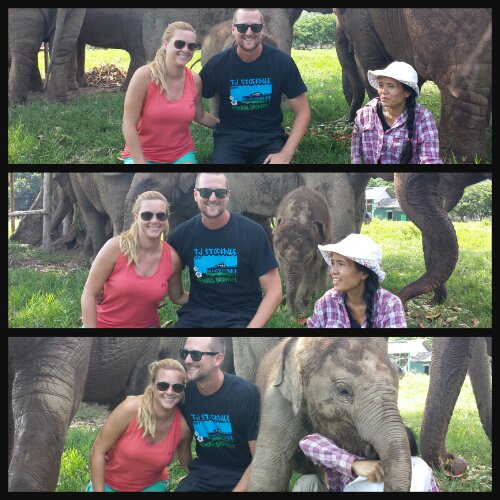 As we were taking a picture with Lek,  her 4 yr old (that is obsessed with her) came running over to play with her. She was knocking us all over the place. Well I unfortunately had my hand behind Lek and within a few seconds realized that that was a bad idea. She ended up standing on my whole hand. I was very shocked at the time and didn’t want to make a fuss assuming she will just move her foot soon. A good 45 seconds in and I am beginning to realize this isn’t good because I am beginning not to feel my hand. At that point I told them she was on my hand and everyone started scrambling to get her off. It took some coaxing but finally she raised foot enough to get my hand out. Surprisingly there was no real damage besides a numbing feeling more most of the day. I guess most people can’t say they had their hand stepped on by a 3000 lb elephant?!

All in all. This is by far one of the best experiences we have ever encountered! This is something we will never forget.

If you want to learn more about ENP go to ElephantNaturePark.org.

Random photos from Glacier. Next up Grand Tetons!
Second hike in Glacier National Park! This hike we met up with some friends from NC! The snow fields were an added bonus!!
A year late in posting, but better late than never! I took a girls trip out West with a great friend and avid hiker! She got my legs moving! Our first hike in Glacier National Park!
Aloha is the Hawaiian word for love, affection, peace, compassion and mercy, that is commonly used as a simple greeting, but has a deeper cultural and spiritual significance to native Hawaiians. We decided to give Aloha back to the island of Maui since tourism and traveling is a sensitive subject for some locals. We dedicated our last morning volunteering our time for the Hawai‘i Land Trust. This particular volunteer spot is at the Waihe‘e Coastal Dunes & Wetlands Refuge. It's 277 acres that HILT bought in 2004 to save from a hotel and golf course being built there. It consists of : Coastal wetlands, dunes, marine shoreline, near-shore reef systems and riparian habitat.
#maui #beautiful #hawaii #bestvacations #visitmaui #bestvacations #natgeotravel #culture #travel #travelgram #culturetrip #igtravel #igtraveller #beach #cave #traveladdict #lonelyplanet #travelawesome #twowayfaryingwanderers #travelstoke #tlpicks #instatravel #view #seaturtle #ocean #roadtohana #latergram📷
Head in the clouds.....
Copious amounts of jumping off waterfalls!
The Eucalyptus trees on the Road to Hana are stunning. Such amazing colors!
Jeep is essential in Hawaii!
Black sand beach!
Don't go chasing waterfalls 🎵🎵
Beautiful Maui waters!
Aloha! 🌺
It's been wayyyyyyyyy too long! Looking forward to our next adventure!
After a grueling hike (elevation climb of roughly 1,500 feet), it was so nice to have a hot chocolate at the Agnes Tea House.
Consolation Lake hike. Roughly 4 miles there and back. The trail end was worth it!
Johnson Canyon. A definite must on your list. Tons of waterfalls and a nice walking path.
We took the Banff Gondola up to a sky bar and boardwalk on Sulfur mountain for sunset (which is like 10 pm). It was definitely worth it!!
%d bloggers like this: