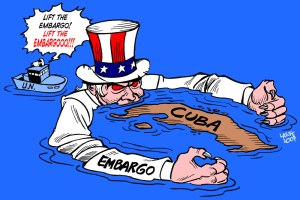 In October 1960, a key incident occurred in which a private American oil refinery in Cuba refused to refine a shipment of Soviet crude oil, and the Cuban government responded by nationalizing all three Cuban refineries, which were all American-owned. This prompted the Eisenhower administration to launch the first trade embargo—a prohibition against selling all products to Cuba except food and medicine. The Cuban regime responded with nationalization of all American businesses and most American privately owned properties on the island. No compensation was given for the seizures, and a number of diplomats were expelled from Cuba.

Bay of Pigs Invasion: The U.S began pursuing covert operations to overthrow the Castro regime. A botched CIA-backed attempt to topple the government fueled Cuban mistrust and nationalism, leading to a secret agreement allowing the Soviet Union to build a missile base on the island. The United States discovered those plans in October of 1962, setting off a fourteen-day standoff. U.S. ships imposed a naval quarantine around the island, and Kennedy demanded the destruction of the missile sites. The Cuban Missile Crisis ended with an agreement that the sites would be dismantled if the United States pledged not to invade Cuba; the United States also secretly agreed to remove nuclear missiles from Turkey.

After the Bay of Pigs Invasion in April 1961, the Cuban government declared that it now considered itself Marxist and socialist, and aligned with the Soviet Union. On September 4, 1961, partly in response, Congress passed the Foreign Assistance Act, A Cold War Act (among many other measures), which prohibited aid to Cuba and authorized the President to impose a complete trade embargo against Cuba.President John F. Kennedy extended measures by Executive Order, first widening the scope of the trade restrictions on February 8, 1962. These measures expanded the embargo to include all imports of products containing Cuban goods, even if the final products had been made or assembled out

Following the Cuban Missile Crisis, Kennedy imposed travel restrictions on February 8, 1963. Under these restrictions, Cuban assets in the U.S. were frozen and the existing restrictions were consolidated.

On December 17, 2014, Barack Obama and Raul Castro announced that the United States and Cuba would restore full diplomatic ties for the first time in more than fifty years. The announcement followed a prisoner swap: The three still-jailed members of the Cuban Five (Cuban intelligence officers arrested in Miami in 1998 and convicted in 2001, who had become national heroes in Cuba) were released in exchange for a U.S. intelligence asset, Rolando Trujillo, who had been imprisoned in Havana for nearly twenty years. Gross was also released that morning on humanitarian grounds. The agreement came after eighteen months of secret talks between U.S. and Cuban officials that were encouraged and brokered by Pope Francis.

Obama also announced a review of Cuba’s status as a terrorist state and an intention to ask Congress to remove the embargo entirely. Cuba agreed to release 53 political prisoners and to allow Red Cross and UN human-rights investigators access. Under the announced changes by the President, there will be an increased ability to transact with Cuban nationals and businesses, including Cuban financial institutions. Additionally, permitted U.S. banks will now be able to open accredited accounts in Cuban banks. On 21 January 2015, talks between U.S. and Cuban officials began in Havana to discuss lifting the embargo.

It was just recently announced that the U.S. Embassy will re-open this month (around July 20th). Maybe we can witness some history while we are there?!?!