Our first great decision was to choose a casa particular and not a hotel! The casa particulars are basically rooms you rent from a local host family. Usually a townhome set up with multiple bedrooms and bathrooms. Upon arrival they welcomed us and treated us as friends of the family. They are probably the most adorable Cubans we have ever seen (husband and wife). They speak little English and ask, “you speak Spanish” we say in Spanish, “un pocito”(sp??), which means a little and it opens the door to speaking full sentences in Spanish……..ummmm what?? It was awkward at first, but we have learned to pick up key words to find out what they are saying. And if we don’t understand, we smile and say ‘no gracias”. Ha! Oh and did we mention our street, Teniente Rey, looks straight down to the Capitol. It was pretty cool seeing that every time we came home (and not to mention a great landmark so we didn’t get lost). Also, we noticed it is the subject (the street with Capitol in the background) for many artists in Havana (more about that later). After spending a little time with our hosts, we took off to explore Havana Viejo (Old Havana). The old streets were exactly what we were anticipating. It seemed as if our plane was a time capsule and brought us back in time to the 1950s. 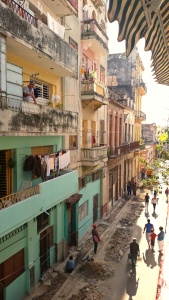 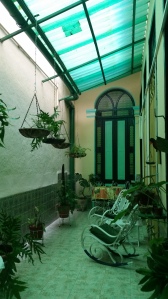 Roaming Havana….here are just a FEW cars out there on the streets…….

Over the next couple of days we got to know the streets and locals of Old Havana quite well. In an environment where the average Cuban makes $20 a month (yes that is a month!), we enjoyed their culture while interacting with the locals. They have been very welcoming, and often astonished when we said we were from the United States. Often replying, “I have a brother in Hialeah”.

Our first day we wandered down Paseo de Marti (Prado); a very nice terrazo walkway with trees lining it. Here you can find the locals biking, skateboarding, rollerblading, hanging out, playing chess, etc. We even found a game of good old stick ball happening on a side street. This took us to the famous Malecon. The Malecon is a long sea wall (think A1A) that travels up and down for many miles. This is another very popular hangout space. Kids cooling off in the water, musicians playing, art displays, fisherman and the list goes on. We were able to catch the sunset and some great pics. 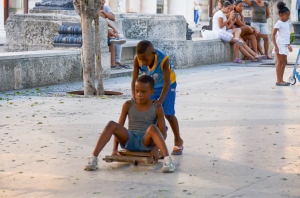 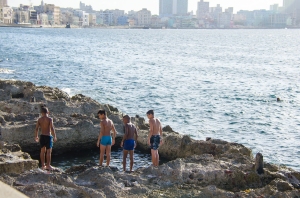 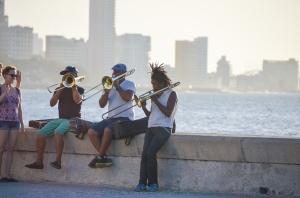 After the Malecon, we walked back towards to the Capitol (down Prado). As we were walking, we noticed a man pushing his old car out of the intersection. We weren’t sure what to do, but when we saw another guy jump in and help push, Scott ran over to help. I guess that is common when you see that because sure enough a good push and the car started again! 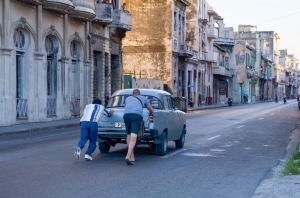 Our first stop for a meal in Havana was at the Art Bar, recommended by our hosts. It was an easy way for us to enjoy our first night. We ate huge Cuban sandwiches, drank delicious Cuban beers (Cristal), and smoked our first real Cuban cigars. Our only complaint was that they played American music (a relatively common trend throughout the places we visited). Cubans LOVE American 90’s classic ballads (think Mariah Carey, Boys To Men). It’s everywhere!! And quite hilarious. 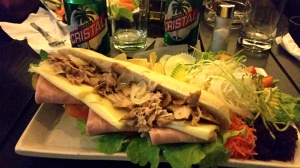 As our first night in Cuba came to an end; we strolled down our street a little more to find one of our favorite spots to relax and people watch as we finished off our cigars on the steps, Plaza de Habana Viejo. 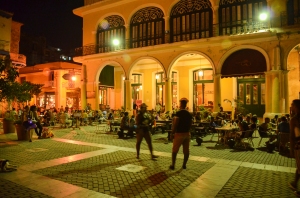 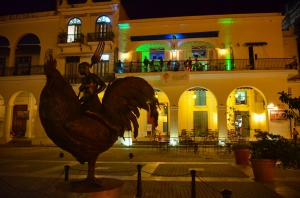 We will dig into Havana more on the next post!!!