Our first full day in Havana and we awake to an enormous Cuban breakfast served by our hosts for $5 CUC (more to come later about the currency in Cuba). We were spoiled to French toast, eggs, fruit platter, cheese spread, rolls, fruit salad, and freshly squeezed juice. After just two meals, we realized the portions are worthy of sharing, which will help us budget for this cash only economy for North American tourists. 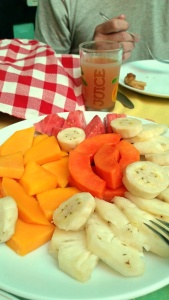 Side note: Tourists in Cuba use a different currency from locals. Tourists use CUC or convertible pesos while locals use regular pesos. It seems confusing, but it’s easy to know who is a tourist and who is a local in Cuba. One CUC equals 24 pesos. As for the cash economy, at this point in time, North American issued debit/credit cards do not work in Cuba (this is ‘supposed’ to be one of the changes in the process). Therefore, whatever cash you bring, that’s all you have. Don’t want to forget to mention the 10% tax charged to exchanging U.S. dollars to CUC. Good thing we did our research and arrived with Canadian dollars! Best exchange rate we found was at the San Jose art warehouse.

Our first full day in Havana was filled with exploration. Run down streets turned into amazing plazas full of life. A turn in the ‘right’ direction landed you in a spot where local artists sang for the constant traffic wandering by. As we were walking we heard an amazing voice and it caught our attention. There was a husband and wife singing a duet and it was pretty legit. We listened and then decided to buy their CD (all of the performers ask for you to buy their CD after listening to them). It is still the best performers we have heard so far (and we have heard a lot), we are very happy to have supported their talent. 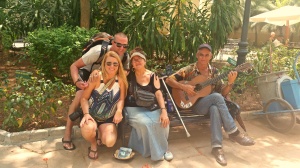 Circling back to street performers… Cubans are very smart. They know the money is in tourism. They pick up talents and display them on the streets. The singing performers are only a small part of them. There are fake statues, guys dressed in 50’s clothing with a cigar, caricatures that can draw your face in less than one minute, women dressed in traditional Cuban clothes with big cigars hanging out their mouths, weiner dogs dressed up, the list goes on and on. You take a picture of them, but you better pay them! Even the guys with the fruit for the locals would sometimes ask for money if you take a picture. TIP: if you ever visit Cuba, bring an extra $10 a day for tips for these performers. 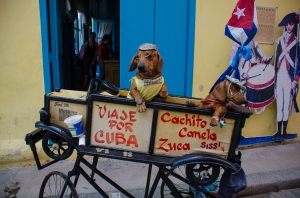 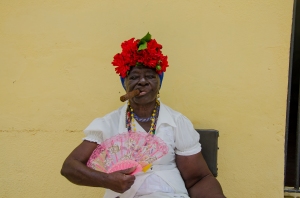 We really don’t mind giving them the money because they get creative and it makes for great pictures (and a great living for them). Also, the restaurant/bar performers will go around more than once for a tip. And you’re expected to tip EACH time. Again, we don’t mind tipping because it is GREAT entertainment.

As we were walking around Havana it started to rain. It was actually quite nice and refreshing. We expected it to rain everyday since it is technically Florida weather. It is now day 8 and it only rained for 45 minutes total! During the rain in Havana we ran into a bar to have a few cervezas. We chatted with the bartender who was a Havana native. She gave us a $3 peso (local currency). It is about 12 cents. She, like any Cubans, are excited for the embargo to be lifted. She shared places to visit outside the city, and a few extra tips for traveling around Havana. 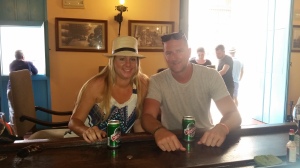 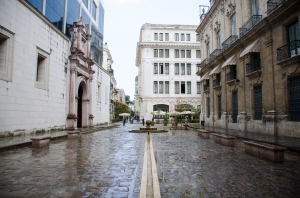 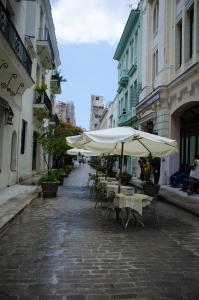 Our exploration around Havana Vieja led us to learn quite a bit about this historic city. About 30 years ago UNISEC identified Old Havana as a World Heritage Site. This honor helped the city as some city projects began to help restore and maintain its character. However, in many places living conditions are far from adequate. 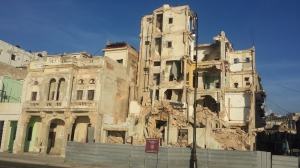 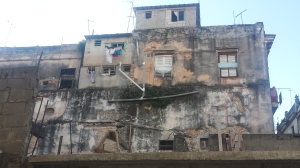 We wandered by La Bodeguita Del Medio, Ernest Hemingway’s bar. He spent quite a bit of time during his life in Havana, including completing many of his life works while in Cuba. The Cubans have embraced him as one of their own and promote his presence in various places around the city. 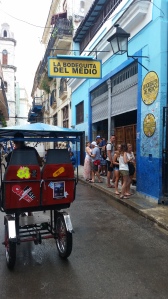 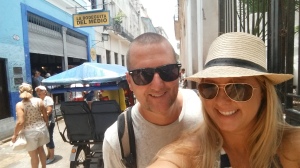 During our exploration we found two gems: The chocolate museum and street churritos! We may or may not have had Churros everyday. For .50 CUC it’s hard to say no! And the chocolate was surpisngly delicious. Some of the best we have had.

On our way to find dinner, we stumbled upon a local soccer game just around the corner from our casa.

Remember when we mentioned portion sizes and a cash economy (budgeting is ultra important). A well placed restaurant served us a healthy portion, enough to share, of spaghetti for less than $3 CUC. From dinner we made one last stop (at least that was the plan) over to Bar Monserrate for some Cuban cigars, Cristal and some awesome live Cuban music.

So rather than end our day, we decided to meander our way down to our favorite plaza, Plaza Viejo. We posted up at La Vitrola and had our first Cuban mojito. This turned into a late night because we met some English tourists and chatted with them for quite a bit. The restaurant had great live music that had equally great people watching (drunk salsa??)! A great way to end a long day exploring Old Havana!