Our last morning we decided to go for one more hike across the dunes. We noticed throughout the trip that this is the time they really come alive with color. Glad we did it! 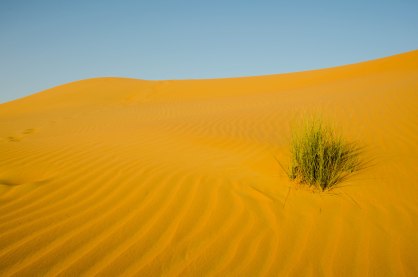 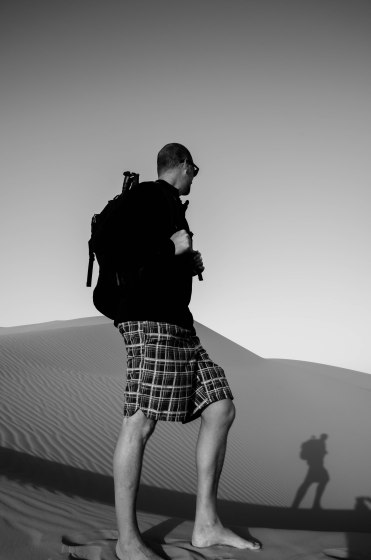 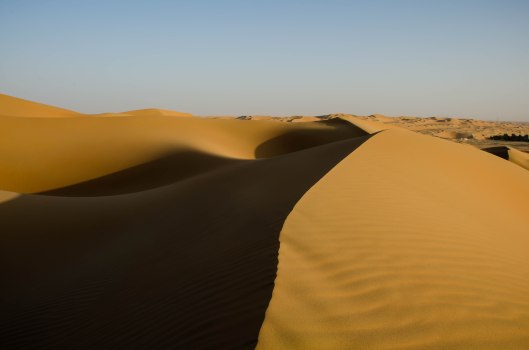 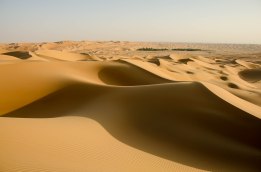 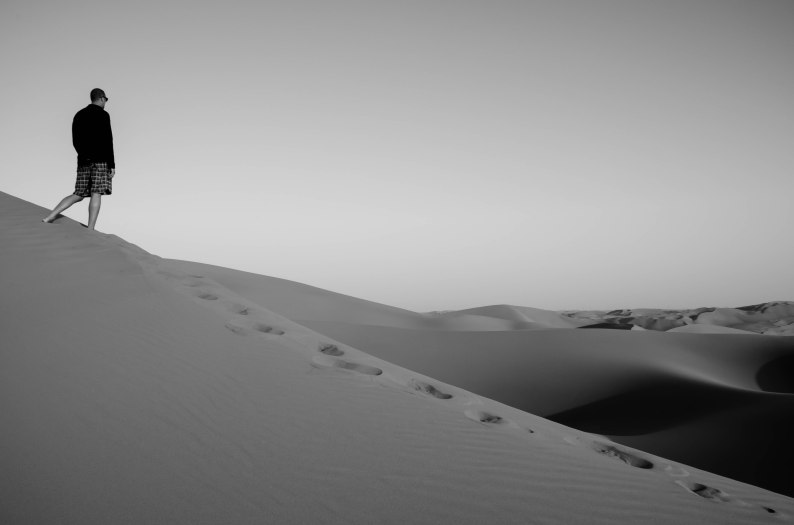 One thing that was so mesmerizing about the sand is when you stepped in it, it moved like water. It was so amazing to see it just ‘drip’. We captured some slo-mo movies so you can see what it looked like! 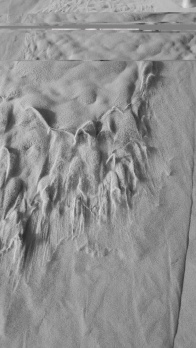 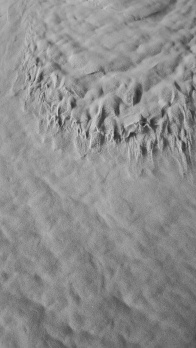 Leaving the Palace of Mirage was very challenging.  Our adventures to other countries are usually planned to end our trips in an oasis of relaxation.  We knew that the Qasr al Sarab was unique, and couldn’t be matched, but we were eager to see some of the more urban parts of the United Arab Emirates. 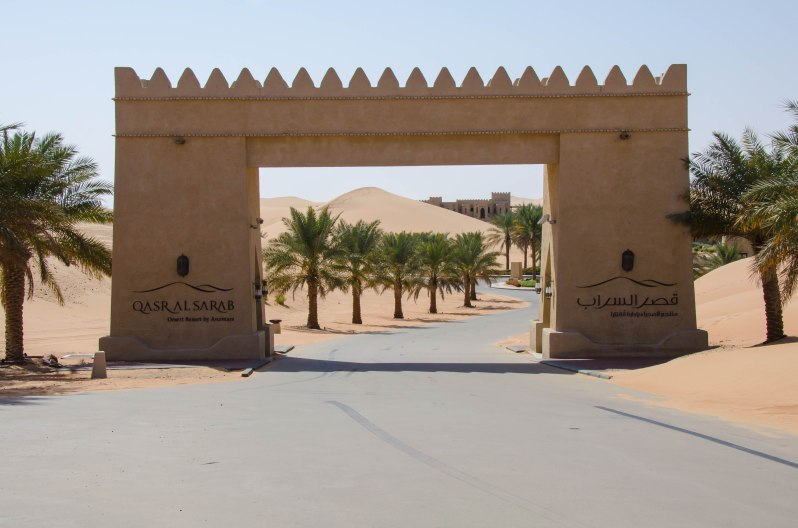 Our two hour journey into the city of Abu Dhabi went from desolate sand washed roads progressively into bustling streets.  The wealth of many in this oil rich Middle Eastern country became quite apparent as we drove into the city.  Ferraris, Range Rovers, G-Wagons, Maseratis, Porsches, Rolls Royces, and many different upscale models we haven’t seen before filled the streets and parking lots. Literally every other car was a Range Rover, G-Wagon or a Ferrari. There were a few casual cars, but the ratio was unreal!

The reason we stopped and stayed the night in Abu Dhabi, was to see the Sheikh Zayed Mosque!  Our trips have led us to many wats and temples around the world, and excluding the Angkor Wat in Cambodia (size), the Grand Mosque in Abu Dhabi is stunning!  This pristine mosque is massive and draws crowds of tourists. 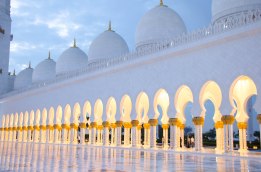 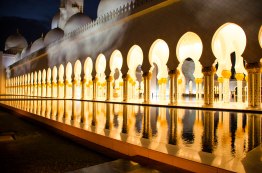 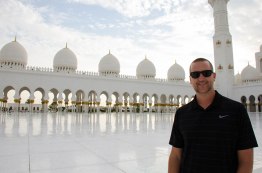 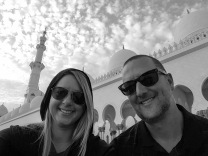 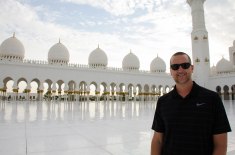 Scott wasn’t feeling too good and I wanted to see the lights come on at the Mosque (heard it was amazing). He went to sleep in the car, so the selfie pictures became abundant. 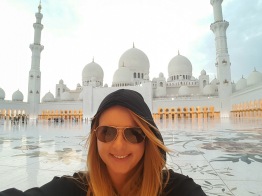 After doing some research, we were astonished to find out it isn’t even one of the top ten largest mosques in the world.  The neighbors of UAE, Saudi Arabia have the largest two.  With that being said, it’s hard to imagine one being more immaculate in nature.  There were also many rules to follow:  Katie had to completely cover up, head to toe; no touching of any kind was permitted, even in photographs (guards were everywhere making people delete pictures if they caught you touching); and many areas were blocked off for worship.

**In 2013, Singer Rihanna received negative criticism for taking photographs, with the Mosque in the background, during a private visit. During the incident she was reported to have posed in a manner deemed offensive and provocative. Staff asked her to leave following the incident (article below).

More recently, Selena Gomez was criticised by Instagram users for posing for pictures at the mosque with her ankle shown (article below).

The Sheikh Zayed Grand Mosque has many special and unique elements: The carpet in the main prayer hall is considered to be the world’s largest carpet made by Iran’s Carpet Company. This carpet measures 60,570 sq ft, and was made by around 1,200-1,300 carpet knotters. The weight is 35 ton and is predominantly made from wool (originating from New Zealand and Iran). There are 2,268,000,000 knots within the carpet and it took approximately two years to complete.

The Mosque has seven imported chandeliers from the company Faustig in Munich Germany that incorporate millions of Swarovski crystrals. The largest chandelier is the second largest known chandelier inside a mosque, the third largest in the world and has a 33 ft diameter and 49 ft height. 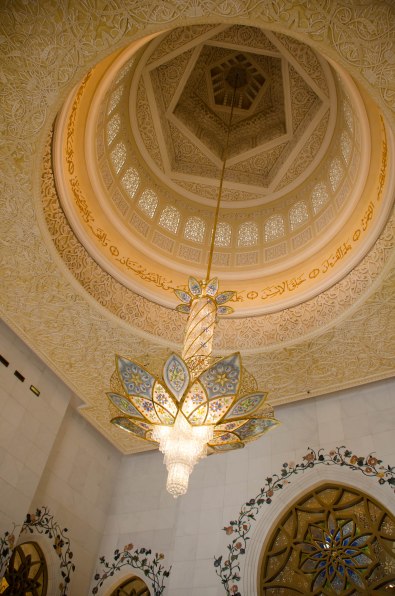 After a few hours of wandering and marveling at this amazing structure, we heading to our resting spot for our one night in Abu Dhabi, the Ritz Carlton.  While it isn’t common for us to splurge on such an expensive hotel, it certainly was a nice luxury. After all, it was Thanksgiving night!  We also saved a little money at our next stop in Dubai as we booked a room through Airbnb.  The hotel was right across the street from the mosque, which provided a perfect night view of the mosque as we walked to grounds of the hotel. 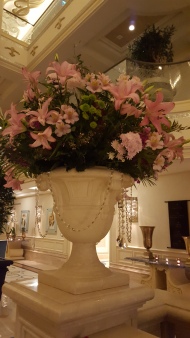 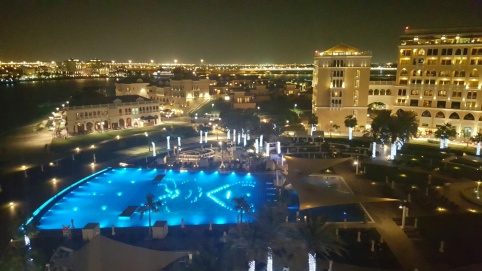 Our Thanksgiving meal! It was a great comfortable setting outside with the Mosque in the background. 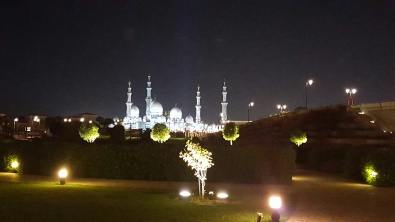 After sleeping in (Scott has been sick for a couple of days), and taking advantage of the comfort of the Ritz, we are off to the world marvel of Dubai! 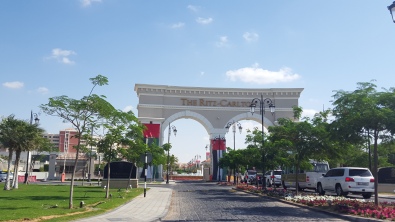