After an enlightening stay in the  Abu Dhabi, we headed off to our last leg of this adventure, Dubai!  From the deserts of the Liwa Oasis to the perfection of the mosque in the city, Abu Dhabi provided us with experiences we will appreciate forever.

Our first stop in Dubai is the famous Dubai Mall!  This is not your typical mall in America.  Well, the first obstacle was getting there.  We were warned not to drive in Dubai, but figured we would take on the challenge (at least Scott would).  Despite the modern marvels, the city is under constant construction.  Roads wind and turn in unusual patterns, and the frustrating part is you see the world’s tallest building, but can’t figure out how to get there and park.  And we learned the hard way that there are five The Address hotels within a mile radius. The third time was the charm.

We had reservations to enjoy Friday brunch at Zeta Lounge, Friday Brunch is a very popular and trendy thing to do in Dubai. Of course we had to partake in the popular activity. And you might be asking yourself…Friday? That’s a weird day for brunch. Friday and Saturday is the weekend here in Dubai. The Zeta Lounge overlooked the world’s tallest building, the Burj Khalifa, looking out over fountains dancing to music, and watching while people ziplined across from world class high rises to the largest mall in the world!  Dubai consists of about 80% foreigners, a fascinating number to digest.  Not exactly the feel you like to get when visiting a country on the other side of the world.  However, the progressive vision and monetary resources to build on innovative thinking is well worth a visit. 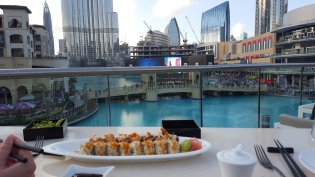 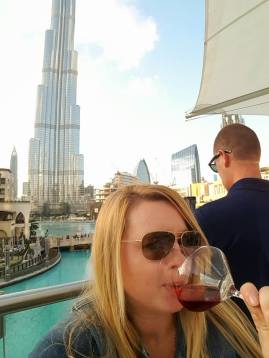 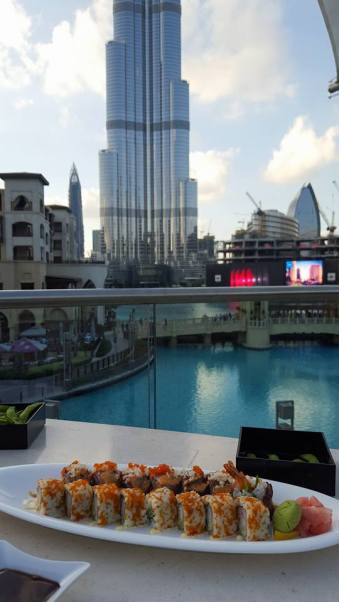 After leaving brunch (and accidentally our credit card) at The Address Hotel, we headed off to our residence for the week, a gem found by Katie on one of the man-made palm islands, The Palm Jumeriah.Side note:  You may recall seeing a large fire in Dubai on New Year’s Eve.  Well, that was The Address Hotel, our first stop in Dubai (the hotel in this picture is the one that had the massive fire).

It’s hard to imagine a country can design man-made islands with an infrastructure sturdy enough to build condos, offices, and resorts like the Atlantis.  Our host, Patrick, was friendly and welcoming to us as we arrived at his 8th floor apartment.  He was quick to point out that there is no crime on The Palm Jumeriah Island, zero!  Always a comforting feeling when traveling, especially when you like to spend time exploring and getting to know different cultures. The accomodations were simple. A bedroom with a bathroom and a cool view of the lazy river and pool. And of course his adorable jack russel Eddie. 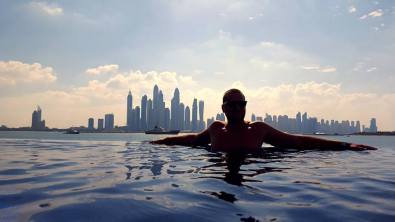 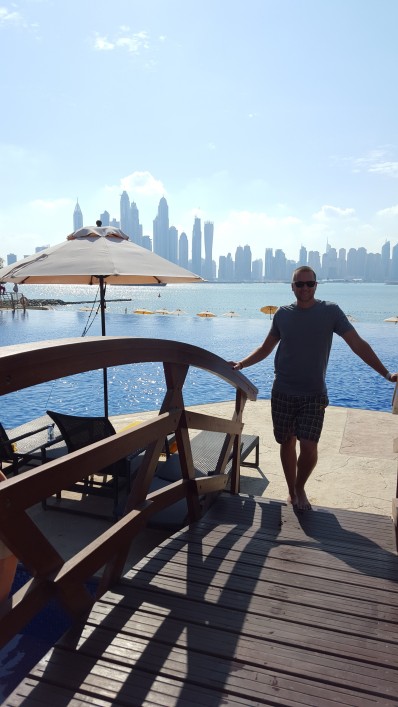 The money flowing in this Middle East country is hard to put into perspective.  Range Rovers are the norm, and seeing Ferraris and Lamborghinis zipping past you is a regular occurrence (lambo on a tow truck??). 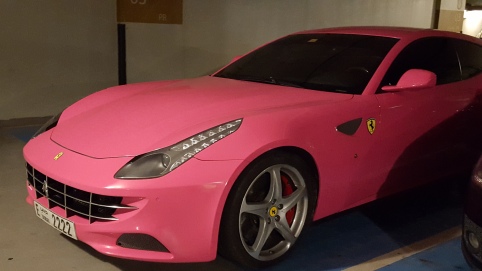 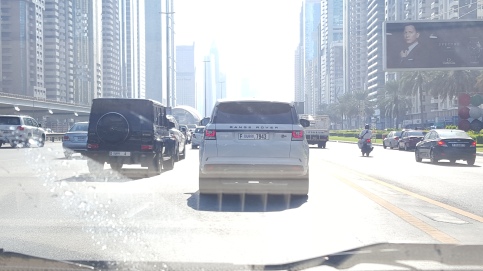 Our visit to Dubai revolved around seeing and experiencing rather large concrete structures.  You wouldn’t think that you would spend much time at a mall on vacation, but when the mall is their ‘Times Square’, you keep getting drawn back to that location.  This included taking a ride to the top of the Burj Khalifa!  Experiencing an elevator ride (the elevator had a countdown on the outside of it for which floor it was on) that takes you over a 140 floors in seconds may be an adventure in itself.  But getting to the top, and seeing this incredible city, on a structure taller than any other in the world, is mesmerizing. 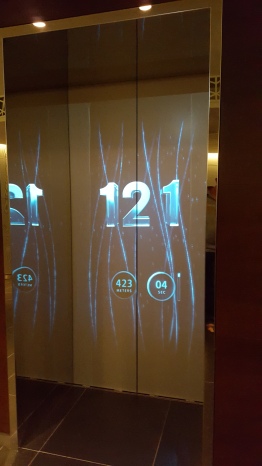 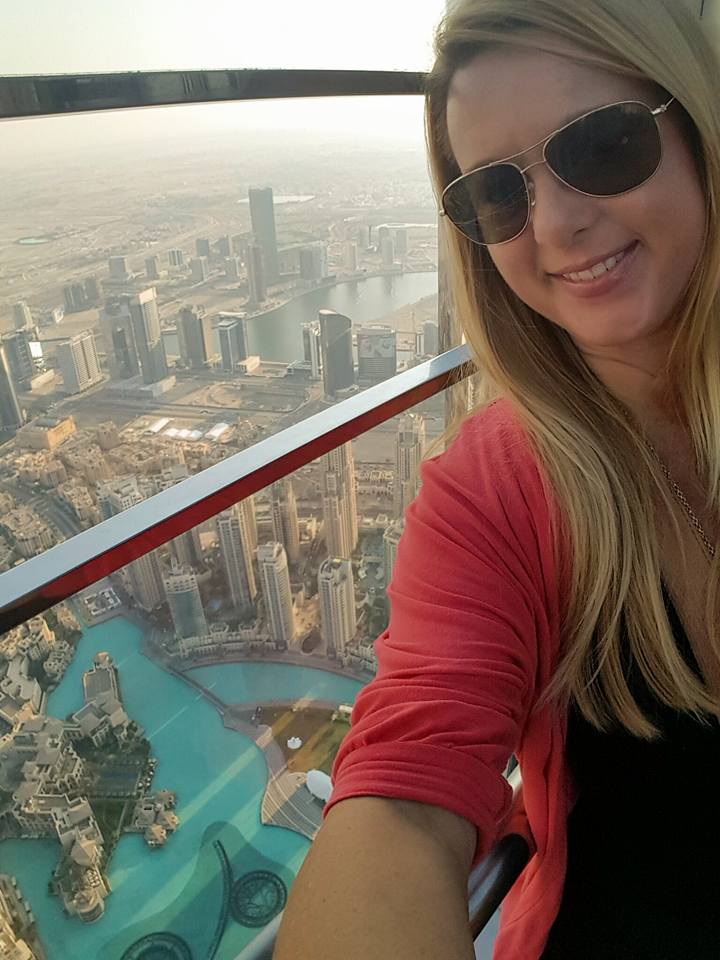 Walking through the Dubai Mall can take days: fashion shows, mall taxis (yes, taxis in the mall), an incredible aquarium, and maybe best of all, people watching!  Not to mention every designer store you can think of, any restaurant you could imagine, all located within this massive environment. 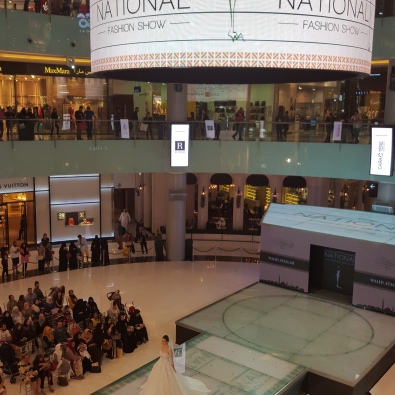 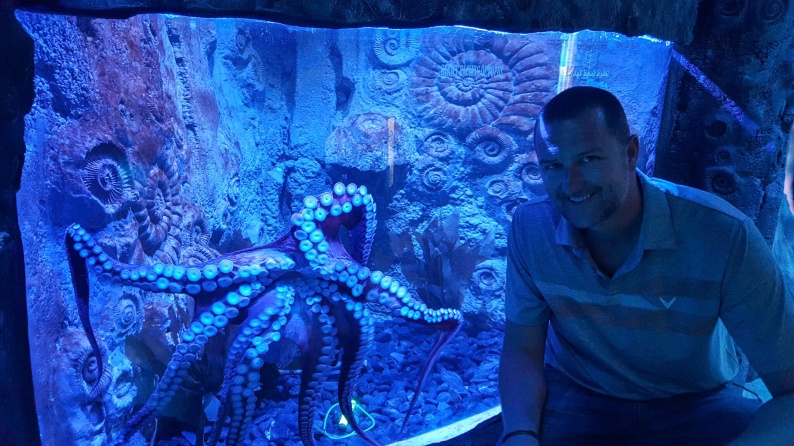 We made sure to spend some time at our Airbnb pool. After all, this is why we booked this place. Hands down probably the best view/pool on the palm.

After some time, we headed off to check out the world’s only 7 star hotel, the Burj Al Arab.  Publicity stunts have happened on the regular at this hotel:  you may recall Andre Agassi playing Roger Federer in an exhibition on the helicopter landing pad located at the top of the building. We grabbed a cocktail at one of the cool bars surrounding the Al Arab and watched the sunset over Dubai.

So no trip is complete without a mistake in navigation, or the feeling of being in a ‘dicey’ situation.  In an effort to find the gold souk (Dubai is known for their very cheap gold), we drove out to Old Dubai.  This was probably an adventure we should have taken on in daylight, or at least with a better idea of where we were going.  Needless to say, we ended up on a bustling street in a remote part of town, where apparently no tourists wander, and we were the only non Middle Eastern people trapped on streets we couldn’t find our way out of.  Although we eventually found our way out without finding the gold souk, we realized that this mission should start fresh in the daytime, when we have a more comforting plan of finding this elusive souk.

Well, the next day when we found the actual gold souk, we were quite disappointed.  We were hoping to buy gold, at a bargain price.  Unfortunately, even though the old streets of Dubai are known for ‘cheap’ gold, we learned that gold isn’t cheap regardless of the ‘discount’!

One of our last and more fascinating stops in Dubai, was a visit to the Dubai Miracle Garden.  Vibrant colors, creative designs, and rows of a variety of plants fill this vast garden. Sprawling over an area of about 72,000 square meters of land, Miracle Garden is the world’s largest natural flower garden featuring over 45 million flowers planted. We got there pretty early to beat the crowds. So glad we did, not only did it get crowded, it got hot! We can’t imagine what summer is like (we heard horror stories). We think Epcot needs to step up their game! This place is amazing!!! 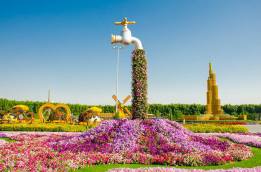 On our last night we sat outside the Dubai mall and enjoyed the outdoors and the dancing fountain ( a lot like the Bellagio in Vegas). 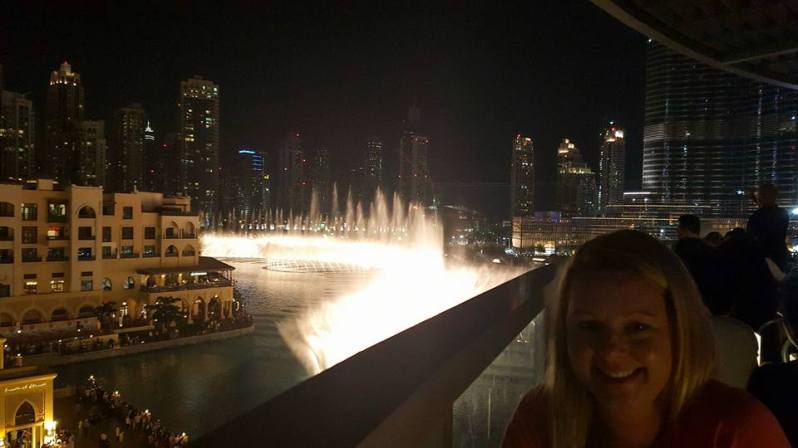 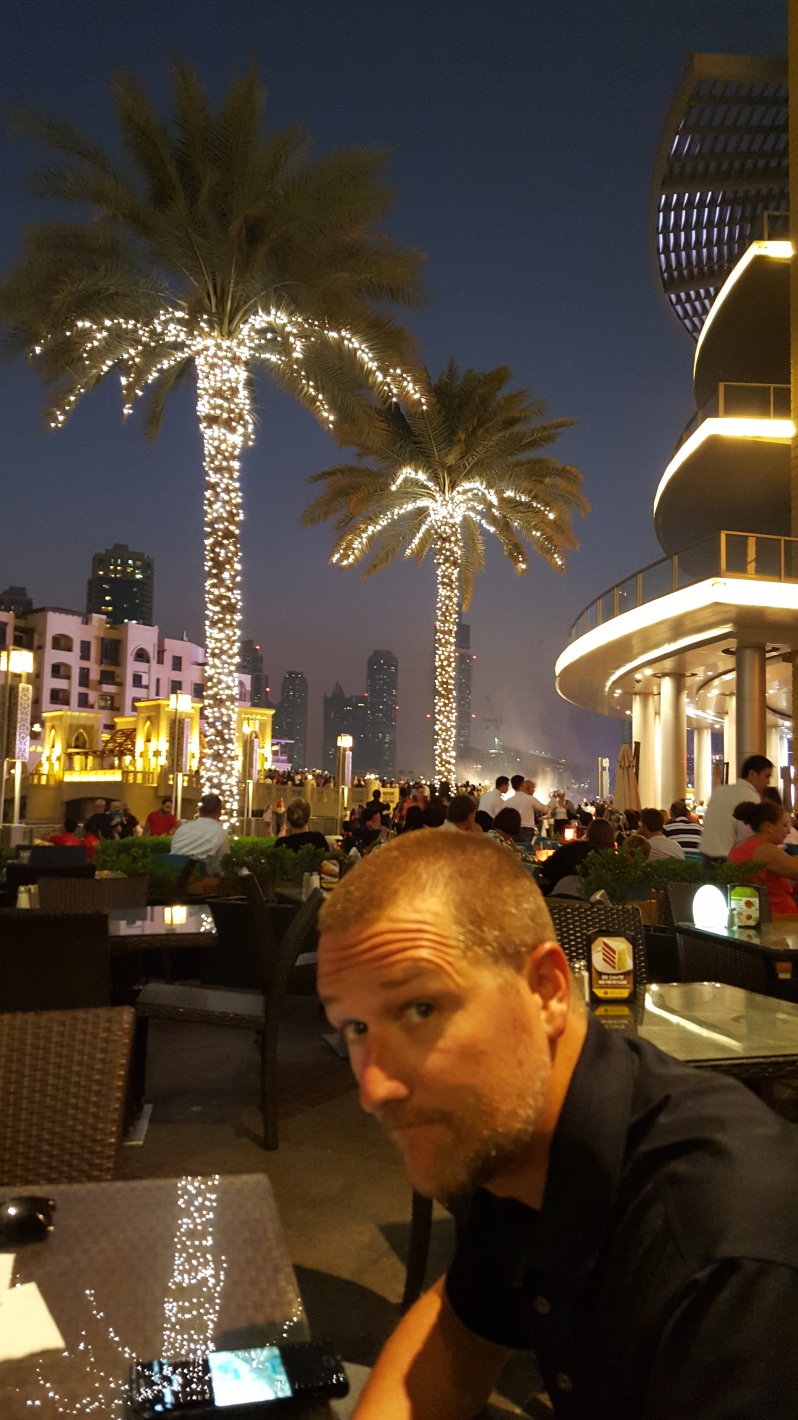