Hola! We are headed to Cuba, again!

After exploring various parts of the island last summer, it was not our original intentions to visit the elusive island of Cuba again this soon, however opportunity provided us with the chance we couldn’t pass up, an eight-day cruise to Cuba, aboard the Fathom, Adonia!  As relations between the U.S. and Cuba continue to improve, the cruise ship Fathom jumped on the idea to cruise to Cuba, the first ship to cruise in over 50 years.  An extra special trip, as we were able to enjoy this cruise with family and family friends! 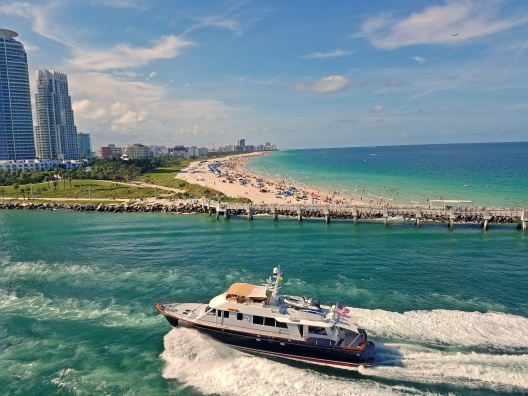 Fathom Cruise is the newest brand in the Carnival Corporation & plc family, which carries nearly 11 million passengers every year to ports around the world. As part of the Carnival family, Fathom is supported by its sister brand, P&O Cruises, in bringing impact travel to life aboard the 704-passenger Adonia, the smallest ship in the P&O fleet. The Adonia is the heir to over 175 years of P&O maritime tradition. And now, in Fathom’s inaugural year, it’s about to establish a new tradition of its own.

Fathom is proud to be the first cruise ship company to be granted U.S. approval for round-trip travel between the U.S. and multiple destinations in Cuba. Fathom cruise itinerary is to the Cuban port cities of Havana, Cienfuegos, and Santiago de Cuba and is authorized under current people-to-people travel guidelines as set forth by the U.S. government. This is Fathom’s 4th trip to Cuba since the inaugural cruise. See website below for more info on Fathom.

After leaving the Port of Miami, we set sail to our first stop, Havana! It took us an overnight trip to reach the port. Luckily our balcony was on the Malecon side. It was so awesome seeing it from this view. People were waving us in and it was a gorgeous (albeit hot) day.

Arriving in Havana, we decided to give the ‘guided tour’ a chance (we were going back and forth on going on our own since we knew Havana so well).  After methodically walking through a few blocks of Old Havana, we decided we would stay for lunch, then venture off on our own. To our delight, it was at the Bodeguita Del Medio. This is the bar where Hemingway and many other poet writers hung out. It is also lays claim to being the birthplace of the Mojito cocktail, prepared in the bar since its opening in 1942, although this is disputed. We didn’t go in the last trip because it was so crowded. After a filling meal, some entertainment and a cold cerveza, we were off to explore Havana.

The heat has been pretty brutal. We remembered a hotel that we enjoyed last time we were here that we have also used as a ‘cool down’/internet spot. We journeyed our way through the vibrant plazas and streets to Parque Central, where there are several hotels.  Unfortunately, the hotel’s A/C was pretty much not existent. So we brought everyone into the dehumidifier room where all the good cigars are. This helped bring our body temperatures down….and our wallets. 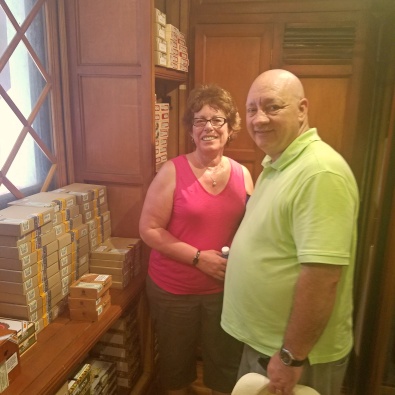 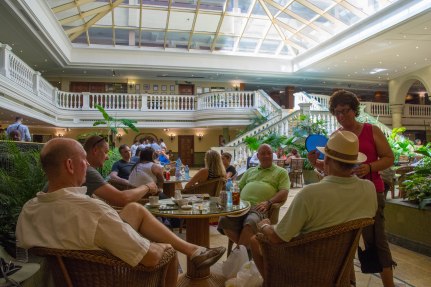 After a brief stop to cool down and to pick up and smoke cigars, Katie negotiated our way into the best experience in Havana, a cruise through Havana down the Malecon in a 1947 Chevy! It was a great way to see the city and enjoy a nice breeze. 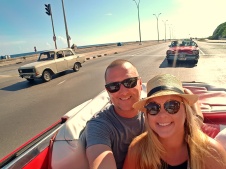 After getting dropped off at the Plaza de San Francisco, we went to a bar for some cervezas at Dos Hermanos. It was a great way to end the day with everyone! My dad bought Cristal (Cuban beer) mugs for his kegerator at home. 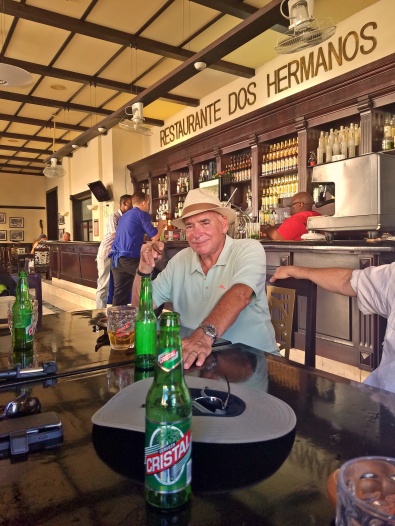 Katie and I decided to enjoy the rest of our evening in our favorite spot in Old Havana, Plaza Vieja (the rest of the group went to Tropicana for the night).  We have found that this lively plaza has a fun atmosphere, mixed with tourists and locals.  As the sun sets, the plaza is provided with enough shade to make outdoor seating a pleasant experience. And of course, smoking a cigar, sipping on a cerveza would not be complete without our own personal entertainment (and of course a cuban coffee). 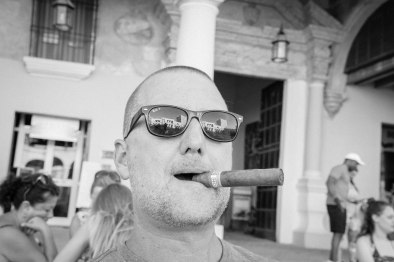 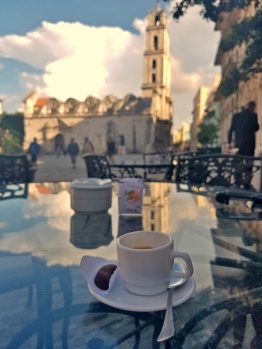 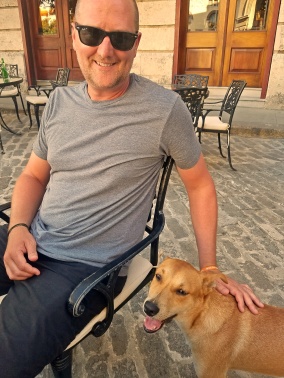 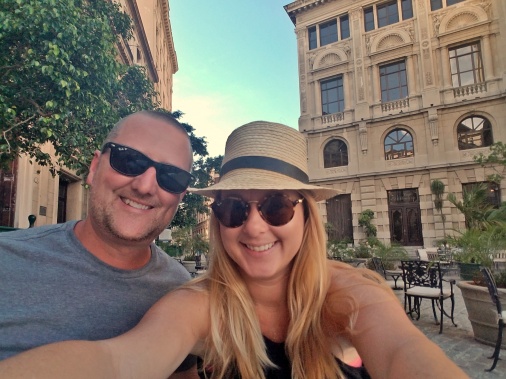 One of the luxuries of cruising to Cuba is being able to escape the suspect conditions of the island and land back on a boat for more than comfortable accommodations. We ate twice at the Ocean Grill which was a fine dining restaurant. It was very good! 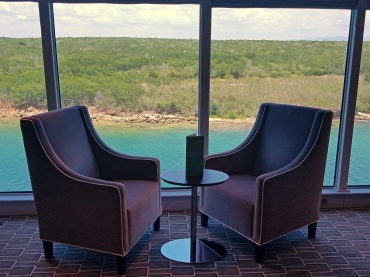 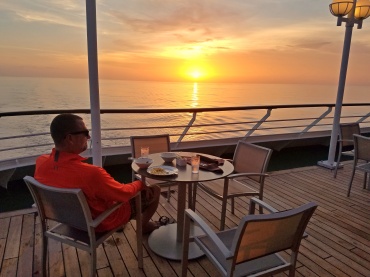 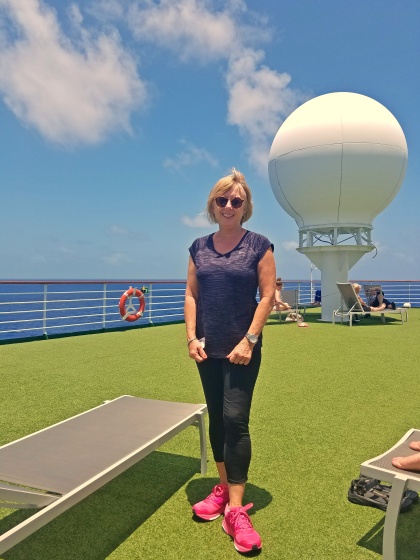 The second day in Havana we decided to completely forgo the tour, a great decision since we were quite familiar with the city, and were looking forward to wandering back to some of our favorite memorable places.  First stop, the Art Warehouse, where of course we all walked away with multiple Cuban paintings. This place is still amazing the second time! 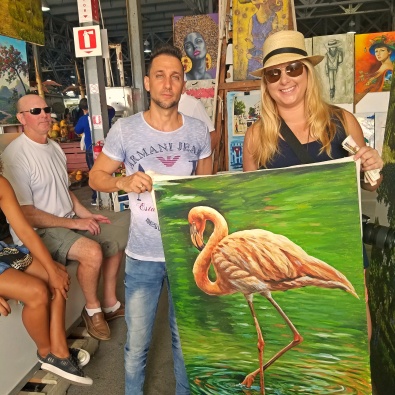 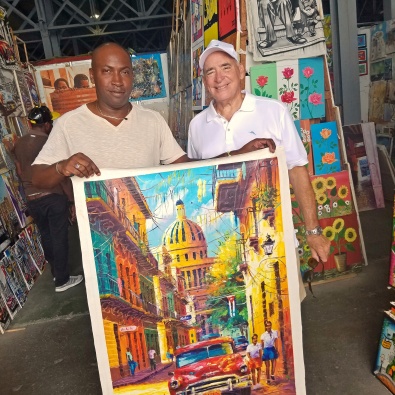 For transportation, we enjoyed a taxi ride in the Coco Taxi’s, a fun way to enjoy a ride along the coast. 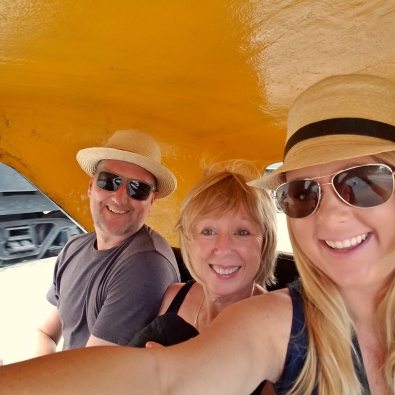 Navigating through the old streets of Havana would not be complete without a stop to visit Churrito Man!  For the price of 0.50 CUC, easily the best bargain in Cuba! 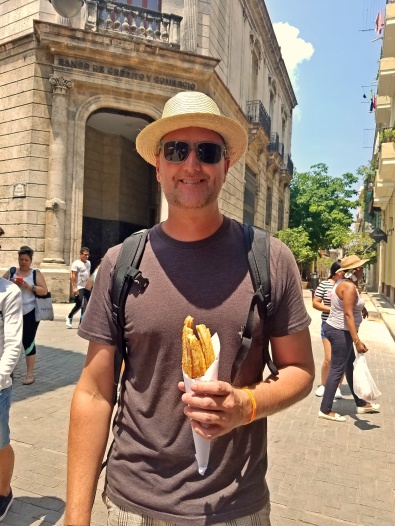 Following the deliciousness, we strolled down memory lane as we walked up Teniente Rey toward the Capitol building.  While the streets are bustling with daily activity, it is sad to see the conditions that many local Cubans encounter.  Unbelievable heat with no air conditioning, along with crumbling buildings, and meager rations of food supplied by the government reminded us of how lucky we are to live in America! 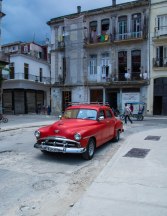 After passing through Parque Central, we stopped at another hotel for cigar fill up and some cold cervezas. After a nice relaxing time, we decided on a stroll down the Prado toward the Malecon. This is a special place in Havana as locals come to enjoy time together, playing soccer in the street, and enjoying each others company.  As we were reminded by our driver, Cubans rely heavily on each other for their well-being, thus making their bond toward one another stronger than many other cultures.  Makes perfect sense… they need each other for food and shelter, something we often take for granted. 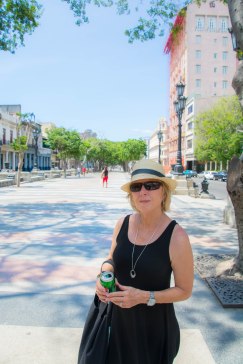 Sadly, as we strolled back to our ship, we walked out of the lively streets of Havana, back to our sorely misfitted cruise ship in the Port of Havana.

After a day at sea, we were excited to experience a new city, Cienfuegos.  We completely understand the reason for many of our port stops, however, our arrival to Cienfuegos at 7:30 am, followed by a departure around noon, did not provide us with ample time to truly experience the culture of this city.  We made the best of it, cruising on the tour bus down the Cienfuegos Malecon, staying on long enough to get us to the city center, then leaving the group to explore on our own. 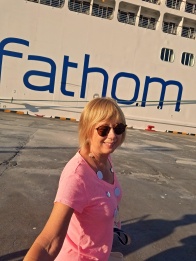 This old city, founded in the 1500s, was built during a time of French influence.  The architecture highlighted the creativity of this time period!

Ceinfuegos is a much smaller city than Havana, with busy streets, and more modern stores, yet not the same electric feeling that Havana offers.  We strolled through the main plaza, stopping in a café for what else, our daily dose of Cuban expresso.  With a few stops along the way, we quickly found ourselves back in our port.

A journey around the shores of Cuba led us to our final stop, the hectic city of Santiago de Cuba.  Probably the most challenging aspect of the cruise, is not being able to know where we will port in comparison to the main streets of the city.  Once again we jumped on the tour bus, and sadly stayed on the tour bus throughout the day.  One positive of the bus, AIR CONDITIONING!  The lameness of the guided tour was given a boost with welcome break from the heat.  Remember, this third world country unfortunately suffers through the conditions of a tropical summer. 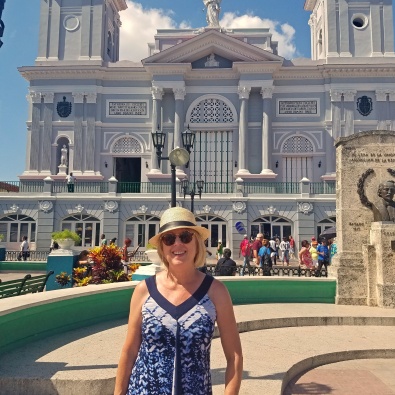 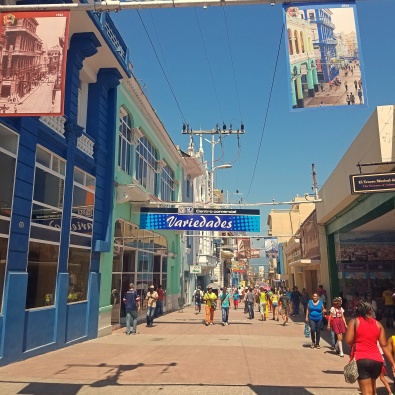 Santiago offered a different terrain, calling itself the San Francisco of Cuba.  The city sits on the side of a hill, challenging locals to move up and down sloped streets in precarious conditions.  For the first time on this journey, our tour bus was accompanied by a motorcycle cop.  Not sure if this is a good thing, or an insult to the cliental of the city.  In our two trips to Cuba, we have become accustomed to the busy streets of this less fortunate country, ignoring constant requests for money, etc.  However, this is the first time we experienced this type of police presence.

They took us to a band that had all females ( 7 to be exact). This is  very rare in Cuba. My dad got in vibe and was dancing away!! They were very good!

We enjoyed some time in the city center, Parque Cespedes for a few hours.  Busy, busy streets, with locals flocking to the tourists, conjuring up a variety of ways to improve their ways of life through the tourist dollar.  We escaped the chaos, finding a gold mine of a café up on top of the city center hotel.  We enjoyed the 360 degree views of this large city, offering a unique perspective. 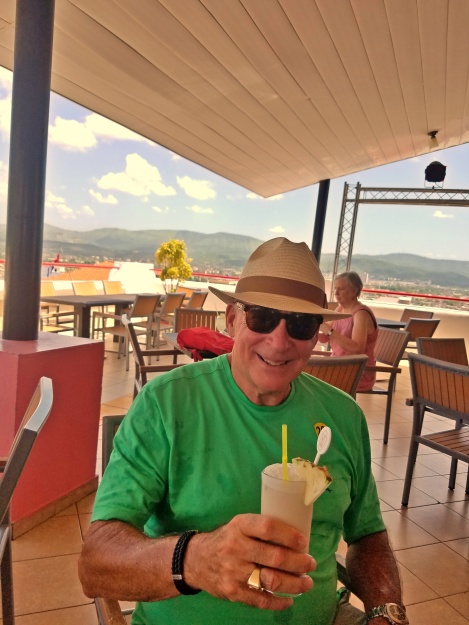 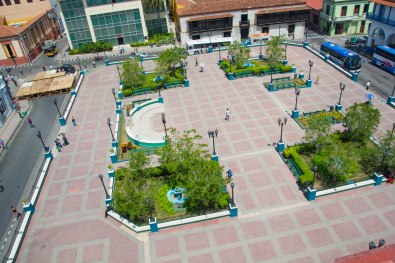 We left Parque Cespedes for a cruise through various parts of Santiago de Cuba.  Our guide proudly boasted about the many accomplishments of the Cuban people, from athletic feats to the success of their medical field.  Our two trips have left us with one positive notions, Cubans are proud, and proud of each other and their culture.  From an outsider’s perspective it is hard to look past what they don’t have, but they find happiness in what their country has offered them.

After lunch,our last two stops including the fort (don’t know the name), and the cemetery (don’t know the name of that either, ha).  We managed to make good use of our time at the fort, grabbing a few more cigars, and couple bottles of rum.  We knew this would be our last moments on the island of Cuba. 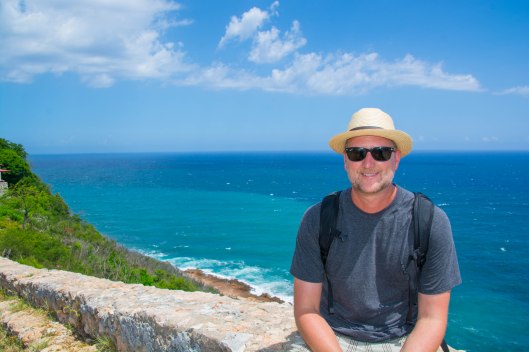 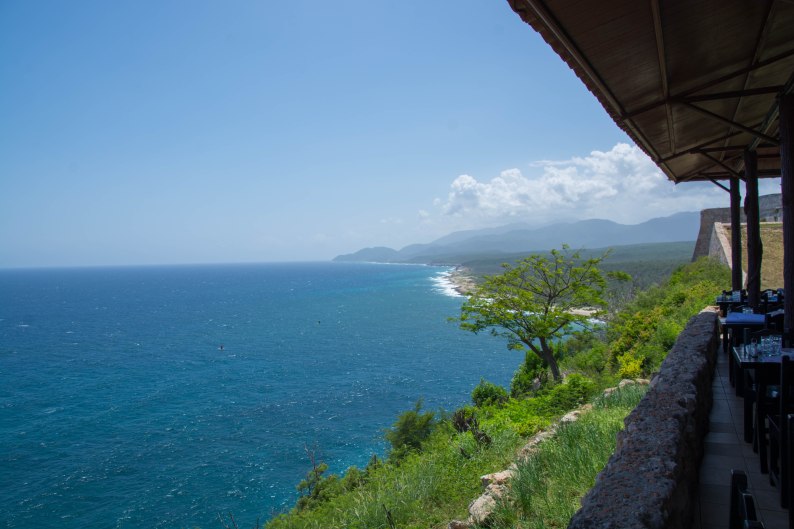 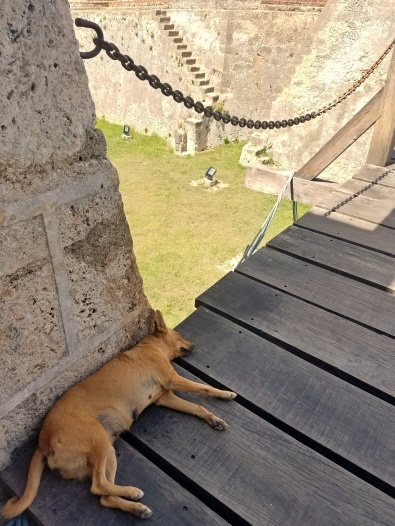 Here are a few more pics of around the cruise….. 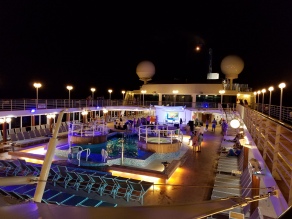 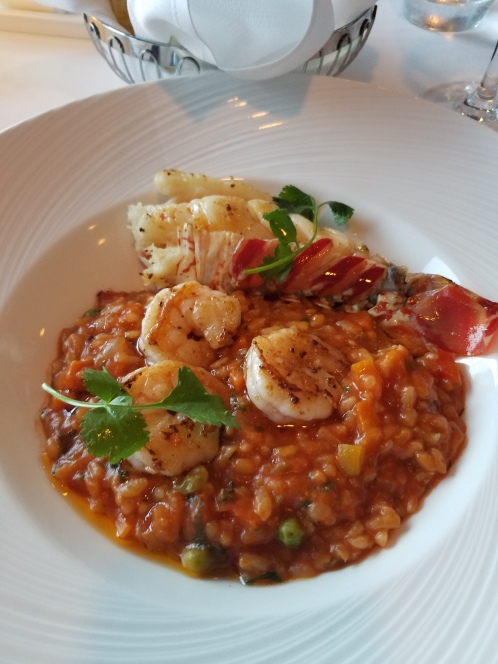 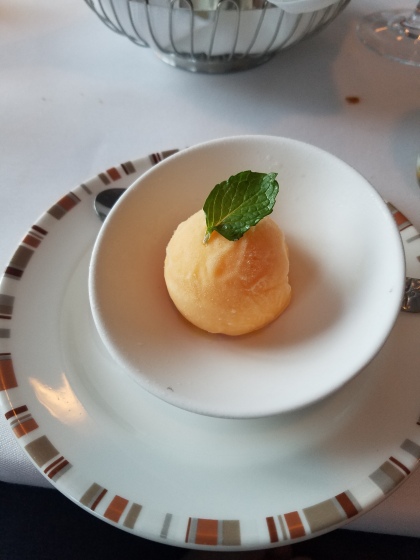 All in all is was a great trip! We loved spending time with Katie’s parents and their friends! As of a few days ago commercial travel has been released to travel from the states ( we used a charter flight last time). Things are changing quickly!!!